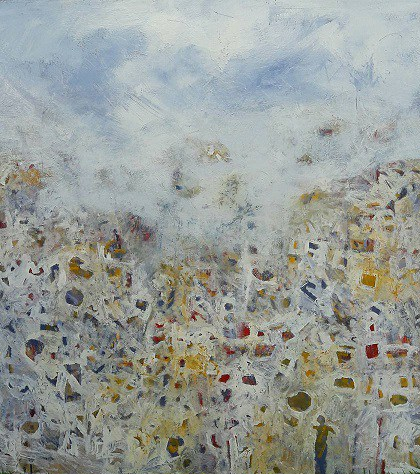 Kiren Thathiah is an artist whose work reflects the complex nature of identity and culture for Indian South Africans especially those who grew up during apartheid. He has participated in many exhibitions both locally and internationally. Two of his art works (discussed below) are held at the Durban Art Gallery while the painting Who Calls is part of the permanent collection at the Tatham Gallery in Pietermaritzburg.

Kiren Thathiah was born in 1959 in Durban. His early years were spent in Greenwood Park where he attended primary school. His father, a school teacher, feared that the ‘big city’ was a bad influence on his children. He subsequently  moved the family to Sezela – a small town on the south coast of Kwazulu-Natal.  Thathiah attended the Umzinto Secondary School which was the nearest school for Indian children.

Despite initially wishing to study law – he eventually settled on studying Fine Art at University of Durban-Westville(UDW).  He graduated with a Masters Degree in 1989. Thathiah lectured at UDW for seven years before joining Vaal University of Technology (VUT).  He went on to become Professor of Fine Art and Head of Visual Arts and Design at VUT. He is now Research Associate at University of Johannesburg.

Thathiah uses mixed media in his painting Temples, which was bought for the Durban Art Gallery collection shortly after he exhibited it as part of his Master’s submission. It features two abstracted buildings within which shadowy forms appear – whether they are deities or humans is unclear. Through a window in the smaller structure is a flame-like image reminiscent of the fire which is central to all Hindu practices. The bright red and yellow also echo the ritualistic colors commonly found in Hinduism. However the temples pictured here do not look like the ornately decorated buildings we usually identify as temples. The references to any Hindu /Indian subject matter is only obliquely hinted at and not immediately obvious. The reasons for this approach can be found in the political and social environment at the time.

During the late 1980’s as Apartheid was slowly being dismantled, South African Indians were increasingly questioning how to position themselves as part of Africa while still acknowledging their cultural heritage. UDW had been a site of active resistance during the struggle and its young artists identified themselves variously as black, South African, African, or South African Indian. There was also an expectation from collectors and galleries that their work had to reflect their Indian heritage. These essentialist notions whereby Indian artists were expected to produce a certain kind of work were rejected by artists like Thathiah.

“There was no formulaic overall conceptualization of identity and what visual form it would take. We were starting to critically examine what ‘Indianness meant in the late 1980’s…There were very few people who took their work into a mode that could be described as obviously Indian but generally it was very low key. We tended to reject the constricting identities prescribed by apartheid and reacted negatively to essentialist definitions of who we were” (Thathiah, 2004)

Landscape is a recurring subject in Thathiah’s work as is evident in the painting Transitions (Durban Art Gallery) where he creates an abstract landscape which is rich in symbolism. Human figures emerge out of, and blend into the darkness – their formlessness prevents us from identifying their gender, race, status or age.  Some appear to walk  upright while others float or lie as if lifeless on the ground. Here again various Hindu symbols are subtly  alluded to within this landscape – an ogee arch (an elaborate curved arch often found in Indian architecture), a mandala (a circle used symbolically in Hinduism to represent the universe), and a trishul (a trident usually held by Lord Shiva). These symbols could allude to the philosophical ideas found in Hinduism, for example: non- materialism (the idea of all humans being equal); karma (the belief in death and rebirth); and the symbiotic relationship between man and nature.

Thathiah produced 5 paintings in his Landscape Series, all of which are more straightforward depictions of the sky, fields and African landscape. However, these panoramic images are not without underlying meaning. In South Africa, land and its ownership has always been highly contested. These landscapes which are devoid of any people lead us to question its ownership and occupation. For example, in the past, the artist Hendrik Pierneef used the empty landscape to justify the idea that the Afrikaner people had every right to claim South African land since it was uninhabited. He repeatedly painted landscapes that showed the African countryside as unoccupied and without visible signs of human activity such as plowed fields, buildings or any other signs that black people had lived there.

Thathiah believes that “one cannot look at landscape as being owned by a certain culture, gender or race; therefore the landscape is devoid of any human element. Landscapes on their own are fraught with issues, the ownership of land, different cultures…yet the land is still owned by the settler minority” (Ramgolam 2004).

Although Thathiah seldom produces and exhibits art these days, he remains an important figure in our art history.  He is also an active participant in the art world as an academic, a writer of various journal articles and has served on the boards of the National Arts Council and the National Arts Gallery. Recently he wrote and published a book called Forging the Rainbow (2016) and he is a producer at S A Local Content – which develops and promotes  musical talent.

Proud, H. Scratches on the Face.