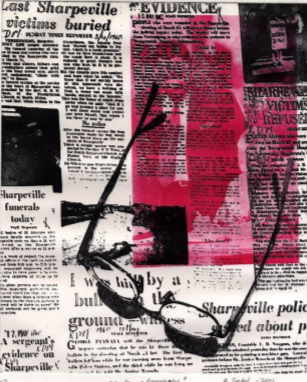 Avitha Sooful is an artist, activist and an academic who has worked in the professional environment of the visual arts in South Africa for most of her career. She studied art during the tumultuous years when the University of Durban-Westville (UDW) was a place of student uprisings, political turmoil and brutal police repression. Her committment to the anti-apartheid struggle during her early years is reflected in the featured work above, Sharpeville I (2004). Her artistic output covers a range of different media from oil paintings to etchings, as well as wood and metal sculpture. Sooful’s political ideologies continue to inform her work both as an artist and administrator; although her focus has now changed to fighting existing social injustices, especially those that deal with race and gender.

Avitha Sooful was born in Durban (1964) in Kwazulu Natal and obtained her undergraduate and Masters degree in Fine Arts from University of Kwazulu Natal (formerly UDW). She has various professional qualifications from other universities. Sooful has worked as an educator at several institutions among them Vaal University of Technology, where she was head of the Visual Art Department. She is currently a Senior Lecturer at the University of Pretoria.

Sooful is the National President of the South African National Association for the Visual Arts (SANAVA) and has performed many different roles within the art world.  She has been a judge for various competitions including the Sasol Wax Competion, the PPC Cement competition, and she has adjudicated the Thami Mnyele Fine Arts Award for several years. Sooful was the senior curator for iKauru Rerouting Dialogue 1994-2004, which showcased art from Southern Africa. She was a panelist on the National Arts Council from 2002 to 2010, and then served on the Department of Arts and Culture selection panel in 2013. Despite these many and varied roles, Sooful continues to practise as an artist and has participated in several exhibitions locally and internationally.

The above print Children should be Seen And Heard, is part of  Art for Humanity’s, Women for Children Portfolio, which focuses on the rights of children. On the left side of the print is a list of names – the varied handwriting indicates that it was written by a series of  children. On the exercise page, the rights of children are carefully written out in a childish handwriting reminiscent of the notes taken in school. A crayon doodle across the page and a picture of a smiling toddler complete the image. The black woodcut print with harsh lines and a safety pin with barbed wire create a discordant note. The forceful lines remind us of anger and perhaps the marks that can be left on a child’s body. The safety pin which was commonly used to secure babies nappies takes on a dangerous aspect when covered with barbed wire. Sooful’s print focuses on the innocence of children and how vulnerable they are to physical, verbal and sexual abuse. The title of the print is a play on the phrase “children should be seen and not heard” since the rise in child abuse makes it important for children to have a voice and to speak out against those who harm them.

Sooful’s Through the Free State is a seemingly innocuous painting of a field turning brown in autumn, against a blue sky. However, the title provides a clue as to the intent behind the painting.  The use of the Afrikaans language in the title alludes to the fact that the Free State was often regarded as the centre of Afrikaner Nationalism. The name ‘Free State’ is also ironic since this province followed harsh apartheid laws in the past to prevent the free movement of  people of colour. During apartheid, Indians were not allowed to enter or live in the Free State except to drive through en route to other destinations.

“Landscape is about time and place. It‘s about history and ownership. I believe they are also about the historical reflection. I found it important to paint exhibitions of memories of landscape to parallel the memories I have of Apartheid‘s separateness. A time when Indians by law were not allowed to live or sleep over in the Free State. My paintings reflect and celebrate the landscape but also concentrate on the lack of the human element” (Avitha Sooful).

Although the landscape is devoid of humans, the man made fence suggest the human presence and is a barrier to the traveller passing through the land while reinforcing the notion of ownership. The ominous darkening sky further reinforces the message that the landscape is unwelcoming.

As part of the Tension Torsion Exhibition 20 Years On, Sooful created an installation called Bite The Bullet which comprised 5 large scale ceramic bullets and 19 spent bullet cartridges. Her concern was that 20 years after South Africa had attained democracy, we had not escaped our violent past and that persistent violence continues to affect our country. South Africa has some of the highest rates in the world for rape, murder and other violent crimes. The larger than sife size bullets are hard to ignore and forces the audience to contemplate these notions of violence. The phrase ‘bite the bullet’ is often used when faced with tough situations implying that sometimes you just have to be brave enough to endure difficulties.

Sooful’s submission for the exhibition The Spiritual in the Material, The Old New and Unknown (above) is made up of 3 pieces which have to be read together as a single entity. Tall metal shafts reach upward and are topped by organic wooden shapes. Sooful’s ideas about spirituality and materiality are reflected in the use of metal – a reference to its importance in our economy and wood from the jacaranda tree which is an invasive species which replaces indigenous trees.

Sooful explains the symbolism of her work as follows, “The shape of the Old, is taken from the symbol representing the Shiva Lingam which reflects on procreation of the world in its phallic representation. The shape is inscribed with the initial works in the Bible which remain incomplete. The New represents a mapping of the land and ownership. Shaped inside this structure is a spiral form and the word Alien is inscribed… The Unknown remains an ambiguous form, undefined as to its true purpose and structure”.

The ‘new’ also invades and displaces the indigenous- whether these are indigenous beliefs or spaces is unclear. Sooful believes that religion has led to a ‘mob mentality’ amongst those who treat others brutally in the name of spirituality. This same mentality now operates ‘in the name of materiality’.

Avitha Sooful’s work as an artist is as important as her contribution to art organisations, education and institutions. The themes that she highlights in her work, from children’s rights to violence to the questions of land ownership, are as relevant today as they were when she first created these artworks. The role of any good artist should be to hold a mirror up to society in order to raise awareness of aspects of the world that we may not be aware of, something that Sooful has successfully done.

Ramgolam, J.  Identity, place and displacement in the visual art of female artists at the Vaal University of Technology (VUT), 1994-2004.

Exhibition catalogue, The Spiritual in the Material  Lizamore & associates.