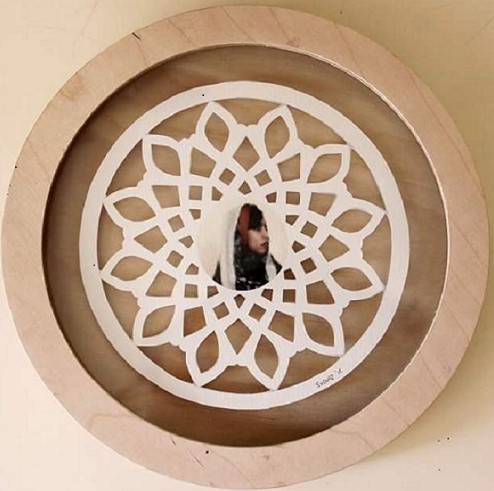 While hand cut paper is not a commonly used medium in art, it has become a signature of Shenaz Mohamed’s multi media artworks. Her intricately hand cut designs on paper, echo those found in Islamic architecture, decorative items and manuscripts. The artwork of this young artist deals with her own experiences of being a Muslim woman and the stereotypes and perceptions that surround the Islamic religion.

Shenaz Mahomed (b.1992 in Pretoria) remembers that the decision to study art was initially met with skepticism from her parents. However, her committment and success has led to them being proud of her efforts and they now fully support her artistic endeavours.

Mahomed obtained both her undergraduate (2014) and Masters degree in Fine Arts, (2018) from the University of Pretoria. She worked as a curator at Fried Contemporary Art Gallery until its closure. She is currently Curatorial assistant and Logistics Manager at Javett Art Centre at the University of Pretoria. In 2016, Mahomed won the David Koloane Award which entitled her to a residency at the Bag Factory Art Studios as well as an opportunity to present her work at the FNB Joberg Art Fair. She has collaborated with other artists and participated in numerous group exhibitions.

Shenaz Mahomed’s use of hand-cut paper as a medium began when as a third year student, she felt less than confident about her ability with drawing or working with ink. She was already interested in stencils so she began experimenting with paper itself as a medium; now it is a key aspect of her work either on its own or combined with photographs or paint.

The work, Adhaan- Call to Worship (for my white neighbour) is a follow up to her earlier work Muslims are Invasive both of which Mahomed created as a response to the situation that arose in Valhalla in Pretoria. In 2016, the city of Tshwane donated land in Valhalla to the Muslim community to build a mosque. The predominantly white residents were outraged and protested vehemently, signing petitions and picketing the area. One commonly cited reason was that a mosque would cause noise (call to worship) and disruption (muslims moving into the area). The title ‘Muslims are Invasive‘ is taken verbatim from one of the picket signs.

Mahomed recalls, “Reading the picket signs and listening to radio interviews with white local residents, I was amused by how ridiculous the blatant stereotyping, appalling terms and phrases used were. These were used to describe the South African Muslim community and the situation” (Email correspondence, 2019).

The situation at Valhalla together with international terror attacks and increasing Islamophobia led to Mahomed’s producing the Halaal Certified print series and the Boom and Kaboom lithographs. The print Halaal Certified-Slaughter features multiple images of AK 47 rifles alluding to war/terror attacks. The word ‘slaughter’ refers to the ritual slaughter of halaal animals during Eid. Anything certified as Halaal is deemed safe for consumption by Muslims and approved by Islam. The conflation of Islam and terror organisations in the minds of some people has led to the belief that the slaughter of innocent people is sanctioned by the Islamic faith. Mahomed takes this contentious topic and presents it with unexpected humour.

I wanted to take on these topics because they should be discussed – there is a fear around such topics especially when people don’t understand what’s happening and don’t want to understand either because they believe it has nothing to do with them. To dismiss the fear, discomfort and sensitivity around these topics – I had to be relatable and for me the most relatable, comfortable, uniting feeling / tactic is humour (Mahomed).

Since Islam forbids the representation of human or religious figures in art, Mahomed admits it is difficult to go against this teaching.

Religious boundaries are something that constantly work on me – I’m very aware of them and how I draw the line. For me, it comes down to a respectful engagement with those boundaries and instead of fearing them, I question and explore them (Mahomed)

Mahomed made the decision to use her own image if she had to use a human figure in an artwork, sometimes using only a silhouette or obscuring the facial features. (See image at the top of page from the Hijab series). This is similar to the stance taken by the artists Hasan and Husain Essop who use multiple images of themselves in their works.

The above artworks, Preyed On I and II, feature Mahomed’s ink stained hands and traditional prayer beads (tasbih). She explains,  “The prayer beads depicted are tainted with black ink through my hands and by way of prayer so as the praying on beads goes on the sacred act is tarnished. This is meant to represent subjective views (be it your own or of others) that could tarnish one’s image and in turn affect your devotion to a faith. Hence the use of the word ‘prey’ instead of ‘pray’ connoting to ideas of stereotyping – something that is very toxic and damaging to those on the receiving end but I also wanted to highlight that we sometimes do it to ourselves – our very own character and lifestyle could push us away from the sacred and spiritual”(Email correspondence).

Mahomed sees this work as a means of self reflection and of interogating her daily practise as a Muslim. By covering the image with the paper cut pieces, she wanted to give an insiders perspective about faith.

Art has always been one of the most effective means with which to draw attention to social injustices and Shenaz Mahomed uses her artwork to push the boundaries of what contemporary Islamic art is traditionally supposed to be, and in doing so highlights how Islamophobia and racism affect the lives of ordinary people. The laborious process of hand cutting intricate Islamic patterns is a nod to her heritage but the new concepts that Mahomed incorporates in her art reveals her concern with what it means to be a Muslim, South African, Indian woman.