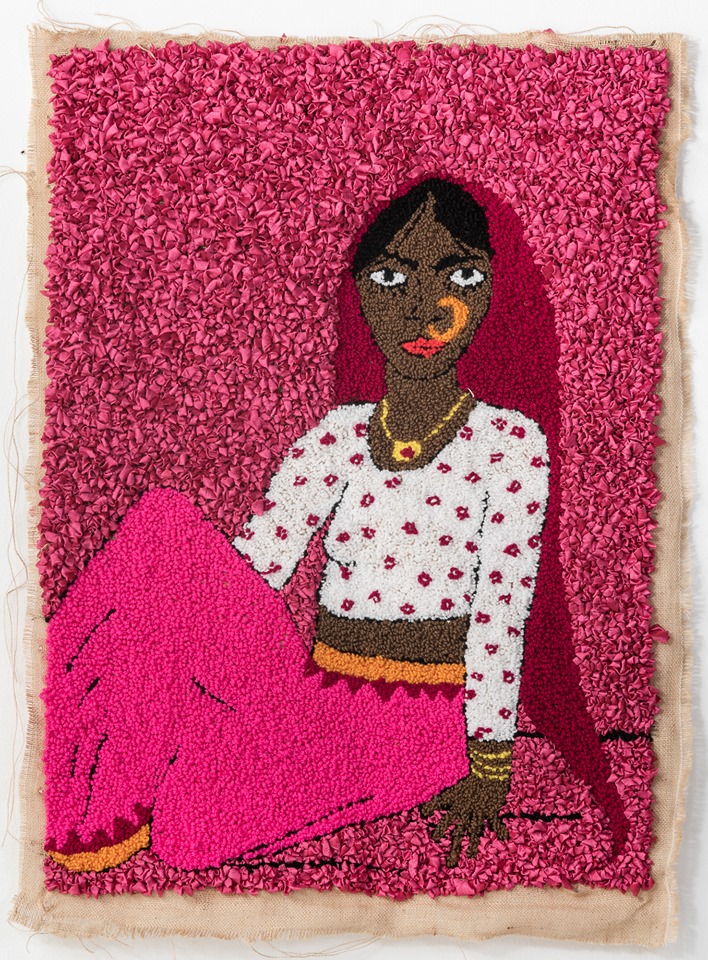 Emphatic Whispers is an exhibition currently on show until 27 July at the Smith Studio  in Cape Town. Two of the artists featured in this group exhibition are Talia Ramkilawan and Alka Dass.

This exhibition looks at how art ‘can make us more empathetic beings and transform the way that we relate to other people’. Empathy is the ability to relate to others on a level ‘where you imagine and understand their lived experience as if it was your own’. (Exhibition Catalogue)

Talia Ramkilawan deals with issues of identity, culture and trauma in her work. Her bright woollen tapestry, Untitled VII (featured above), portrays a woman who we identify as Indian because of her skin tone, dress and ornate jewellery. Ramkilawan’s tapestries celebrate the complexity of South African Indian identity by subverting the stereotypical images associated with ‘Indianness’.

These stereotypes are either derogatory or suggest a homogenous group whose members are interchangable. One way of overcoming the clichèd stereotypes is by creating and making visible alternate images, as Ramkilawan has done.

Alka Dass’s work is based on her own history and experiences as a South African Indian woman. She describes her work as ‘a visual-psychological interpretation of women of colour’ in which she examines the cultural spaces that they traditionally occupy. Dass co-opts objects commonly found in Indian homes and associated with female identity in her multi media works. In the work titled ‘Fast Car’, the photograph is printed on a ‘doily’ and is surrounded by embroidery typical of woman’s handcraft.

She also uses old family photographs and personal items together with texts from her diary to deal with emotional issues. The embroidery on the handkerchief below reads, “This is about something that happened a long time ago but continues to affect me today.”

Both Dass and Ramkilawan draw on their Indian heritage and culture to create art that confronts the challenges faced by young South Africans of Indian descent. They also belong to Kutti Collective – a group of artists and creatives of Indian /Desi descent who collaborate with and support each other. The collective also attempt to change the lack of representation of Indian creatives in the media and art world which, in South Africa, tends to focus on white and black artists.

Dass, A. Where does the Pain go, When it goes Away, Exhibition catalogue, Lizamore & Associates